Scenes from the 2020 Armory Show

The 2020 edition of the Armory Show opened to invited guests on Wednesday, March 4, and runs at Piers 90 and 94 through Sunday, March 8. Despite ongoing concerns around the world over the new coronavirus and the ways in which it could spread in large crowds, the fair went on, and many dealers said the affair was business as usual during its early hours.

The fair brings together over 180 galleries from some 32 countries. In the Focus section, organized by Jamillah James, a curator at the Institute of Contemporary Art, Los Angeles, paintings by Amir H. Fallah at New York’s Denny Dimin Gallery and an installation (and other works) by Jamal Cyrus at Houston’s Inman Gallery were among the many strong points in a tight section under the theme of “Another Time, Another Place.”

Elsewhere in the fair, many exhibitors presented works from a number of artists in their roster. Among the highlights were massive Cor-ten steel sculptures by Raul Mourão at Galeria Nara Roesler (of São Paulo, Rio de Janeiro, and New York), a photo polyptych by Chantal Peñalosa at Mexico City’s Proyectos Monclova, and a sculpture by Liliana Porter at Houston’s Sicardi Ayers Bacino. 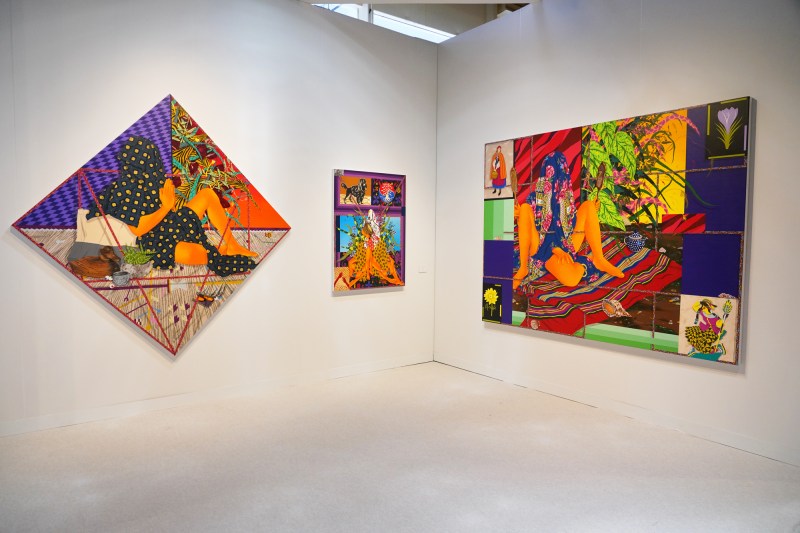 Three paintings by Amir H. Fallah on view in the Focus section in the booth of New York’s Denny Dimin Gallery. To create these compositions, Fallah said that he visits the homes of his sitters and does informal interviews with them to learn about their lives and the objects they surround themselves with. He then will pose the create a still-life of sorts with them at the center and cover the subject with a sheet and photograph them.