“Relative Unknowns: When Images Outlast Memory, but not Meaning”

Growing up in Chicago, the house of my childhood had the usual range of portraits on display, with a few unfortunate mid-90s studio shots of me and my sister thrown in the mix. My parents, like so many others, designated a specific wall to these images, the ones deemed important enough to merit framing and display.

Most of us grow up in homes where a mix of historical and recent family photos preserve the family’s collective memory, linking present to past, and serving as a tangible way to honor and safeguard the memories of loved ones no longer with us physically. Yet our displays — like our memories — are selective.

Even as a little kid, I felt drawn most to the photos that didn’t make the cut. These, my mother kept relegated to a large, plastic bin in the upstairs closet. As soon as I could climb a ladder, I’d spend hours poring over the contents. I loved examining the faces of people I knew, witnessing their different hairstyles and dress choices over time.

I quickly grew to care just as much about these photos of people unfamiliar to me. Though in similar configurations — group shots, images of couples and single individuals, casual and studio settings — these looked older. They showed people in what seemed, to my young eyes, ancient forms of dress, stern and laughing faces both connected to me and foreign. They ranged from crisp black-and-white to sepia, with many nestled in elaborate cardboard frames, branded in gold ink with studio names from another era.

My father, in a rare gust of organizational zeal, had taken a pen directly to the surface of many of the oldest images, circling and labeling individuals related to us. On the cardboard frame of one beautiful portrait of a young couple, in 1920s or ’30s dress, he had scribbled the words “Don’t Know.” Something about that branding, his branding, gave me pause. Knowing my mother would eventually throw away the anonymous photographs (her joy in disposal matched my father’s in hoarding), I decided to protect these special, mysterious portraits, surreptitiously relocating them in my room.

Over the years, they came with me to college and, later, they followed my path from one apartment to the next.

I can’t say I focused a lot on these images over the years. I got busy becoming a visual artist and JewBu, exploring paper as a medium and meditation as a spiritual method. The images of my anonymous ancestors stayed mostly in the back of my mind.

In my late 20s, when I’d begun meditating, I found myself taking out my stash of forgotten photos more often, wondering about the choices these people made that, at least partly, resulted in my current life. Buddhism taught me about cause and effect, that every action and thought has a meaningful result. Finding an artistic means to honor these people felt like a natural, necessary expression of gratitude. Whoever they were, and whatever they did, I realized I owed them thanks for living their lives in a way that resulted in my existence.

I make portraits that look painterly or even photographic, but that are crafted using only paper, tape, and glue. Employing papers of every color and opacity, I combine and layer them to create as nuanced a tonal range as possible. In 2010 I began applying this method to portraits of my forgotten family members, in a series now titled Relative Unknowns. I keep the original photograph and make a separate collage depicting that photo, down to the tiniest detail. I then place many of the collages in original or era-appropriate cardboard photo frames. There are now 30 collages in all, one for each photo I have of an anonymous ancestor.

It feels strangely appropriate that this series, made by a Jewish artist and depicting Jewish people, should partly spring from a non-Jewish practice. The works in Relative Unknowns are simultaneously specifically Jewish and entirely universal. They depict Hebrew school classes, men and women in traditional Jewish dress, and portraits possibly taken in the Holy Land. At the same time, the story of Diaspora and new American identity they tell could belong to any immigrant group.

The collage of a young boy in his finest attire, proudly sitting tall in front of an American flag, displays a patriotic zeal familiar to many new citizens, historically and today. Jews and non-Jews alike in the late 1900s paid for the kinds of professional studio sittings, complete with painted backdrops, recreated in this series. As photography changed and cameras became more affordable, the kinds of family snapshots from the ’40s and ‘50s represented in my work were rampant among Americans of every stripe. In this way Relative Unknowns simultaneously documents my family’s particular story, the European Jewish Diaspora story, and the story of portrait photography over the last hundred years or so. 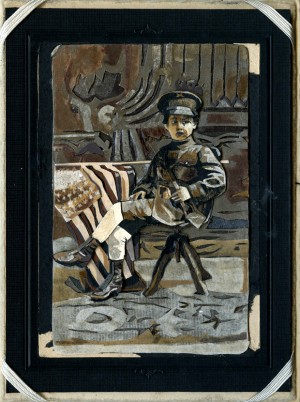 How right that an exhibition of the complete Relative Unknowns series, my first solo exhibition in New York, should end up at Denny Gallery on the Lower East Side. I love representing my anonymous ancestors in the neighborhood where so many now forgotten people, including Ashkenazi Jews like my family, crafted their initial American identity. The gallery actually looks onto part of the Tenement Museum, an institution dedicated to making the silent stories of immigration seen and known. It’s an ideal setting for reclaiming and celebrating the nameless people who’ve come before us.

When people come into the gallery they quickly project narratives onto the portraits, crafting identities for the people they see based on small clues and imagination. The same collage of a serious, bespectacled young man can be a German science student to one viewer, a newly American storeowner to another. In making these images, I’ve often done the same thing over the past three years. By now I have a fantasy crafted for every person whose image I’ve made in paper, though no way of knowing if or how my vision matches the reality. This work makes me wonder at what point photographs of us, the living, will become fodder for speculation, and how long it takes for images to outlast memory.

I see what I do as an honoring practice, a way to resurrect the forgotten. In remaking their images detail by detail in paper, I manage to bring these people out of the closet and onto the wall. This act of examining these forgotten faces for many, many hours, of endeavoring to capture their essence, ends up affording them more individual time and focus than the framed family images I pass in my apartment every day. The good fortune of being an artist means I can not only prevent these individuals from landing in the garbage or thrift store, I can also, through the act of recreation, exhibit them and sell them into homes all over the world. My Unknowns now live in places as disparate as Texas and Munich, an unexpected, fine art Diaspora. I like to think it’s the start of a long journey.

Relative Unknowns is on view at Denny Gallery in New York through February 2, 2014.

Danielle Durchslag is an artist and arts educator living in New York City. Her work has been exhibited at the Brooklyn Public Library, Jewish Theological Seminary, The Wassaic Project, and the Invisible Dog, among others. She received a BA from Wellesley College and an MA from New York University.